With 2 weeks fishing in France ahead of me and my pal Gary all the tackle was sorted, we just needed to sort the bait. Bait choice was simple, Mainline Essential Cell really does the business for me so that was a no brainer. We also took a new Bait to try from Mainline.

The train journey was painless with us in France before we knew it. We had an 11 hour journey to complete. Arriving at the lake at 5pm on the Friday evening and the hand over not until 9am on the Saturday we had time to go out with boys for a meal at a local restaurant which as you can imagine was a great laugh and a real good way to start a session, with great company and fine food the night was one to remember, the anticipation and excitement grew….

Saturday morning arrived and with it the usual work load that goes hand in hand with a 2 week session, setting up bivvies’ and food tents etc. If I was fishing for just a week then I would have been more prepared with rigs tied and PVA bags made etc., but with us having the 2 weeks booked in the swim we had time to find and bait spots and rest the swim before wetting a line. 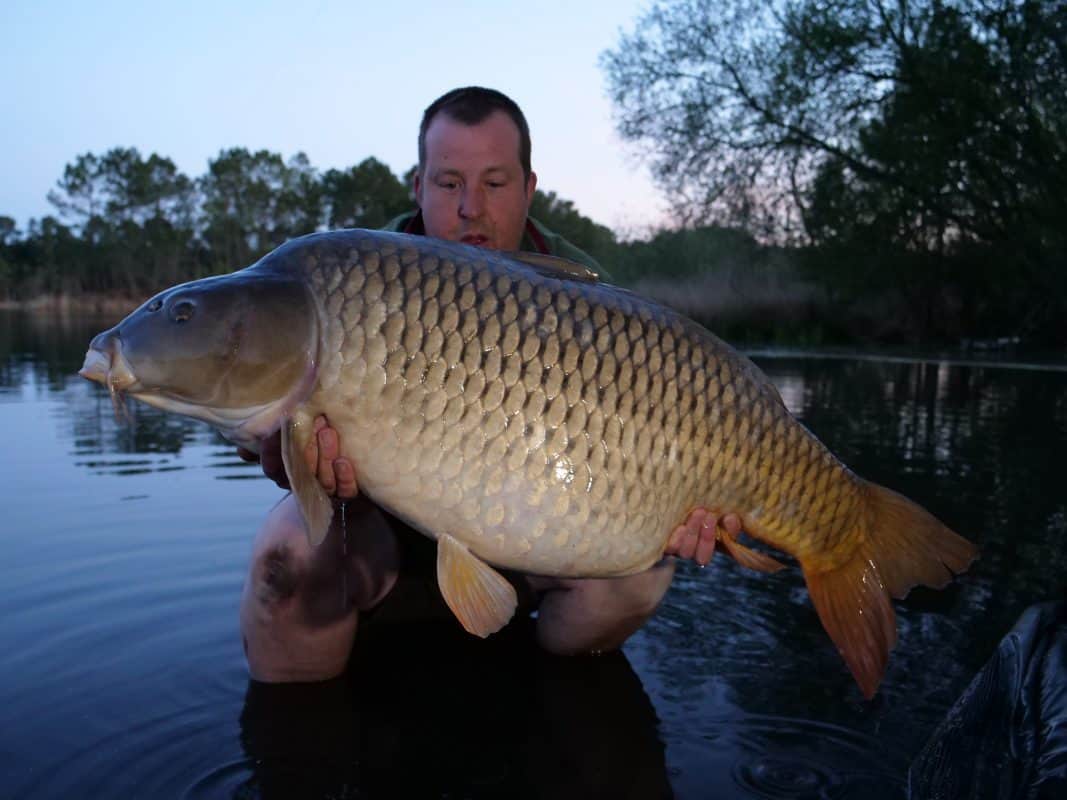 After 3 days and 6-7 fish for Gary, he had a 42lb Common which tipped his personal best common… Woot!! My turn. An hour after sitting there willing a rod to roar off it happened and I was on it, the battle was from the boat with the fish staying deep with long lunges (I knew it was a decent one) I netted a stunning 58lb common.

Chuffed to bits having that fish I said to Gal that he could have the rods until he had a real special fish. 3 days and again 6 or 7 fish later and Gal had a stunning 45lb common. We were both buzzin. After the 45 to Gal it was my turn again… Rod number 7 wrenched over and I was all over it like a cheap suit. The rod was fished to a spot approximately 180-200 yards out, close to a snag. I learnt into the fish and started walking backwards… It started to kite left, phew open water.

This fish kitted over 200 yards crossing 6 other rods without picking up the lines, I now had the fish in the left hand margin plodding up and down. After a few minutes the fish started to tire, Gal being the top bloke he is was already in the margin poised with the net, as the fish popped up for the net both Gal and me see the fish and the serious side kicked in (it looked a very big fish) as the fish hit the spreader block the pair of us jumped about like kids.

On the scales the needle was pulled round to a new PB common for me 66lb 2oz. to say I was buzzin would be an understatement… A 30kilo Plus common WOOW…. At this stage I was well and truly blown away. I said to Gal I was game over and he needed to jump on the rods (time to celebrate)… 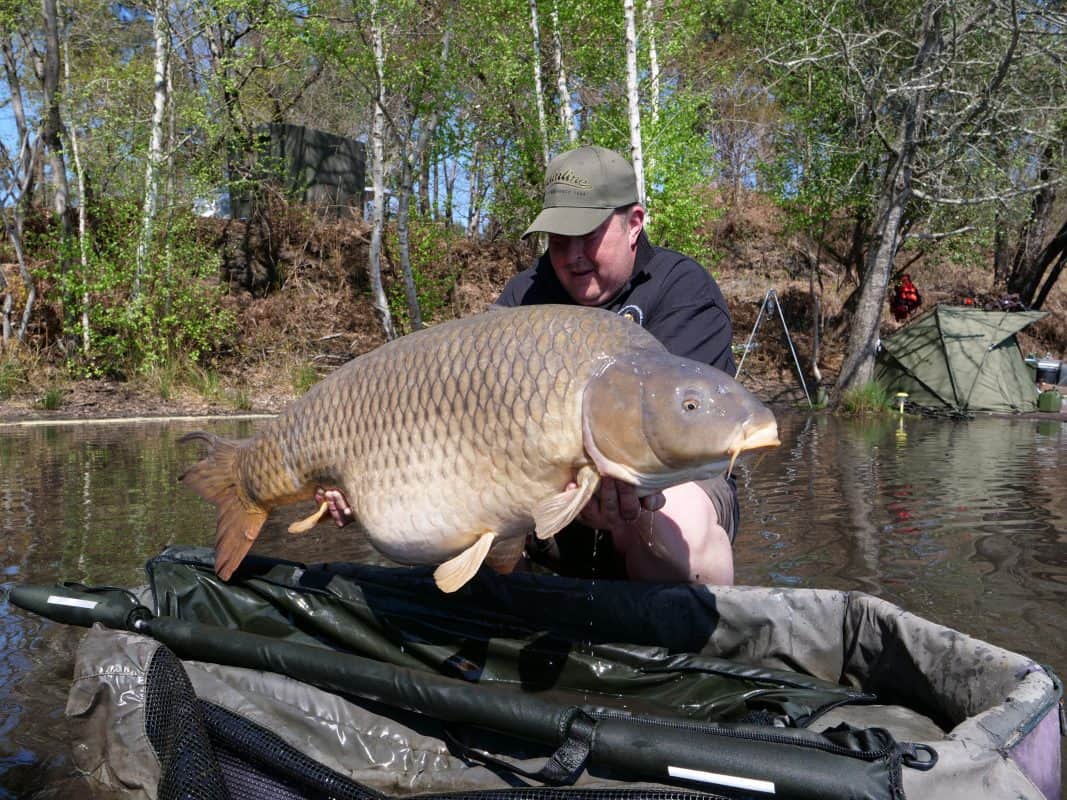 A few days had passed and the bites had slowed, from having such a good first week we wasn’t complaining but we really needed for Gal to get the monkey off his back and bag a chunk. The big fish just wasn’t happening for Gal and he REALLY needed one. I was happy to sit out the rest of our time there in the hope that a 50 would come along for Gal. Surely it was just a matter of time, but we was getting a bite a day now so the fish had moved off us somewhat.

It had been 2 days without a bite and things didn’t look like changing so at this point Gary had to give in and go shower… (He said he had wet wipe washed but after 8 days the shower was screaming)….  You guessed it completely out the blue rod 4 rips off and I find myself out in the boat chasing after a very angry fish. I would like to say I had full control and it was text book stuff but in truth this thing beat the crap out of me and I was relieved when it finally went into the net.

I then had that sinking feeling as I gazed into the net and saw yet another 50+ fish this time though it was a mirror. As you can imagine the phone call to Gal was kind of a hard one to make. He was a true gent and took the news with a laugh and within 20 minutes of him going he was back helping with the weighing and pics. (A true mate)! 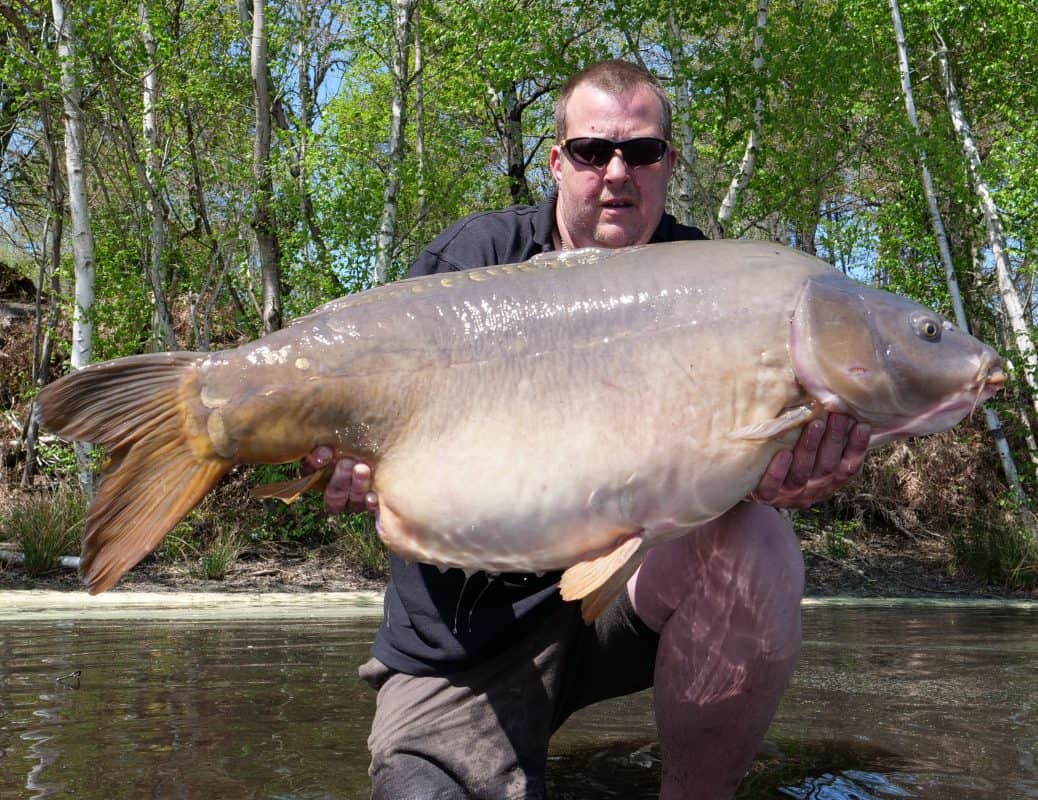 We had 4 days left and things were patchy with no real signs of things happening, we had not had much action since my 56 and I was really starting to worry that the poor sod had a curse. On the Thursday morning Gal had a lovely mid 30 common so we still had the odd fish in front of us, spirits remained high but time really was starting to run out for us and after a 2 week session where you feel you have all the time in the world to now no more than 48 hours fishing time left… Come on you chunk!!!

Thursday night passed as most of the nights, quiet… With us both up early on the Friday morning savouring the mist filed sun rise, hot strong coffee and a smoke….times to cherish, it really did look good. 9:30am and a rod rattles off and Gal was on it in a flash. After what looked like a good scrap Gal netted another lovely fish a mirror this time, at low 40 this fish was very welcomed indeed.

Sitting there talking about whether or not that would be our only morning bite and if indeed that would be our last fish before the dreaded pack up and rod number 4 is away. Again Gal was on it and it looked like this one was no tiddler.

Played from the bank it was great to watch Gal go through the trials and tribulations of playing what was clearly a proper one, from the moments of muttering don’t come off to the heavy breathing I found the experience quiet entertaining.  He deserved this fish and when it finally went in the net we both jumped around in the margin like a pair of demented idiots. We didn’t care as laying in the folds of the net lay a stunning 52lb common. A new PB and so well deserved. 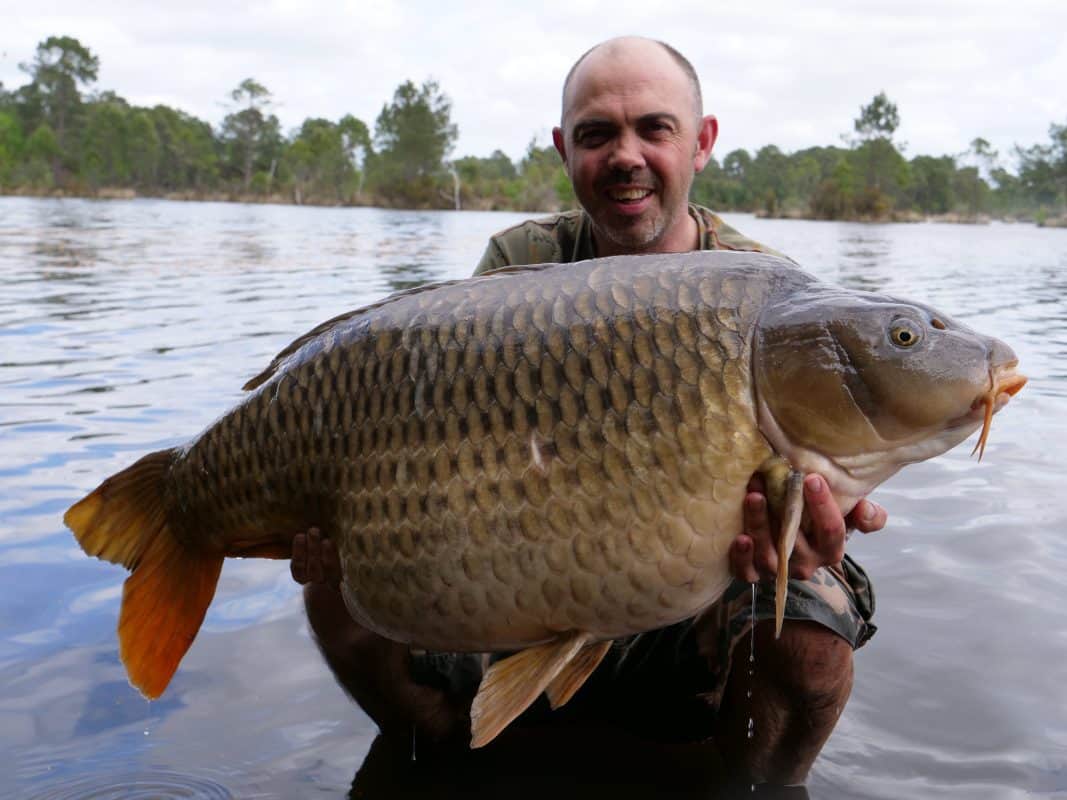 To say I was made up for Gal was an understatement (Chuffed to bits), it also meant that it was MY turn back on the rods, with all the commotion and the fact morning was our bite time, I was shocked when rod 5 rattle off. This resulted in a lovely dark 42lb common for me. What a last day, one I will remember for a very long time.

That ended our action and all we had to deal with was the pack down and the 700 mile drive home, but do know what we didn’t care as we had both had a fantastic time and yes already booked for next April…….

Gary… Cheers bud, you’re a great friend, a great cook and a fine fishing partner. And yes its your turn next on the rods. 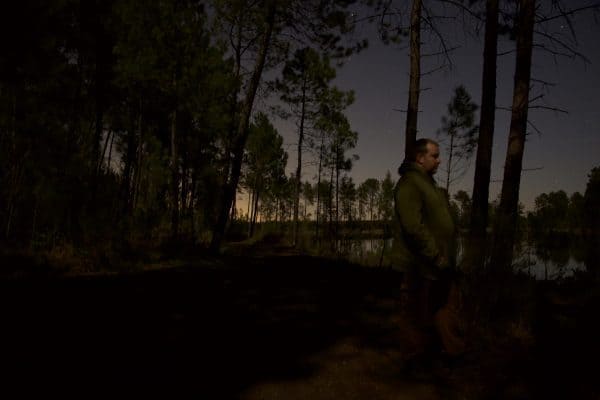 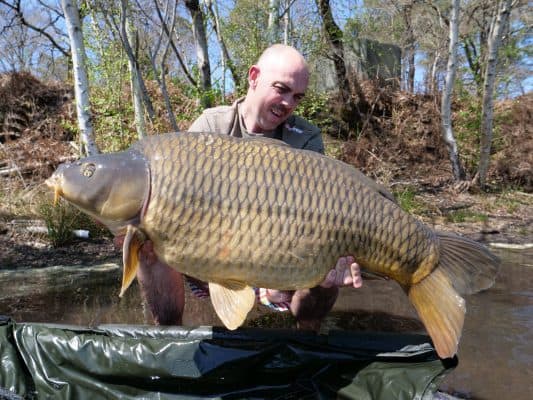 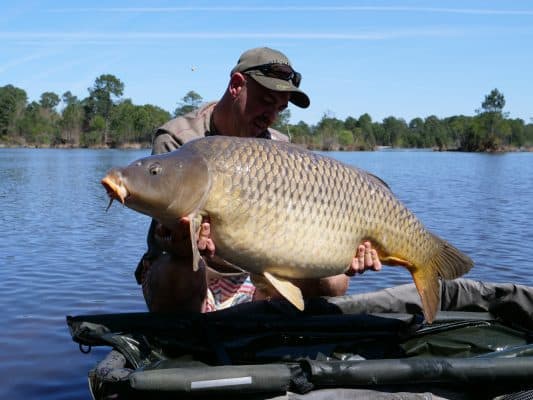 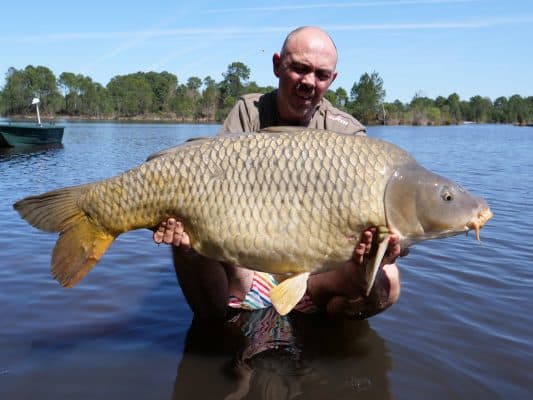 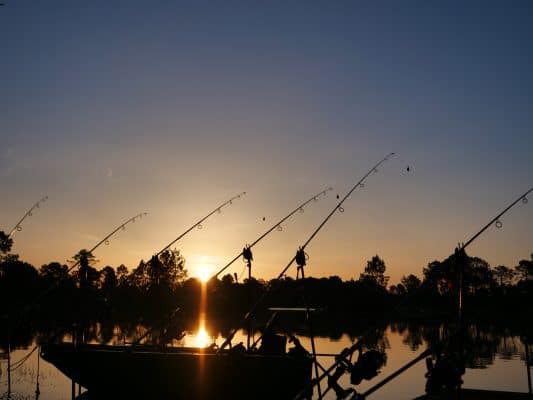 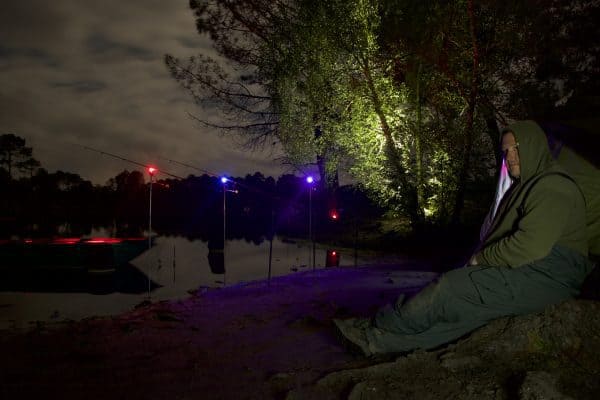 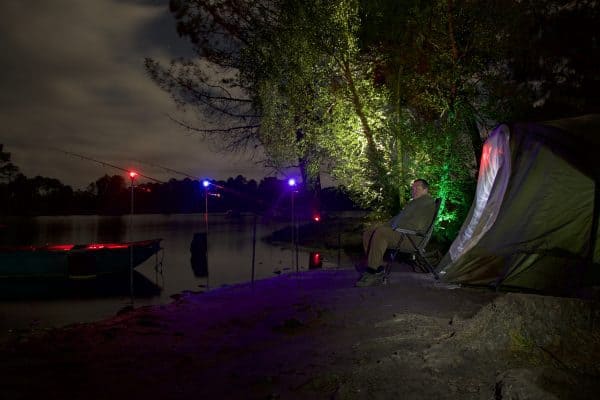 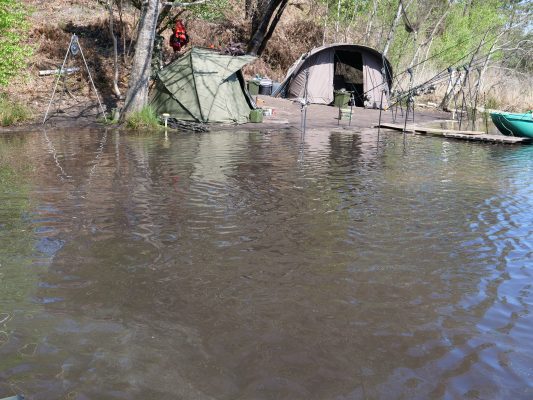 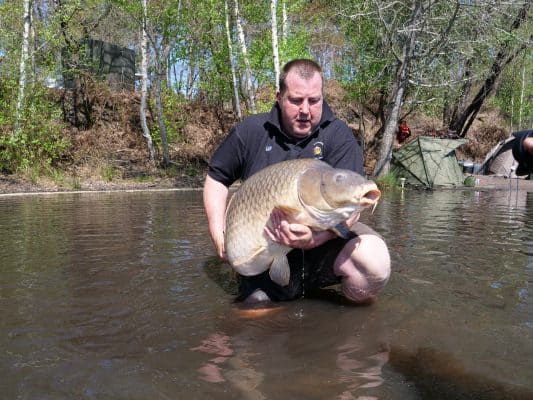 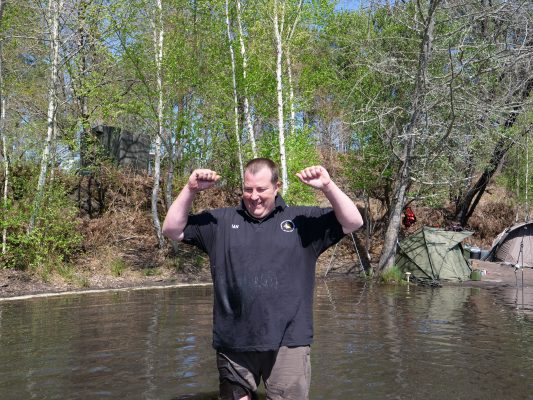 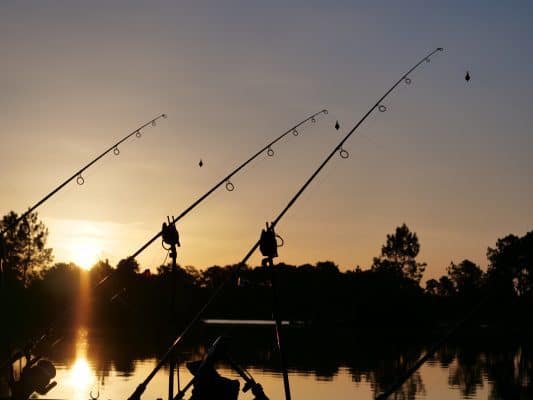 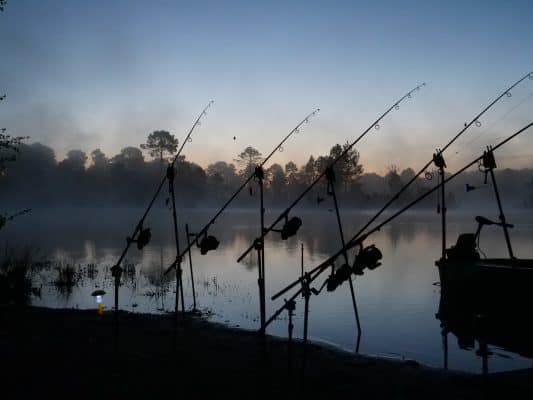 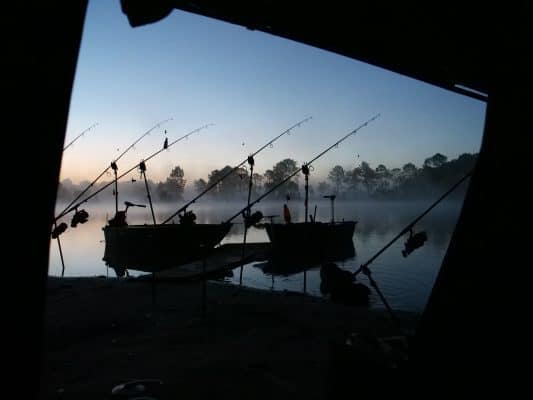 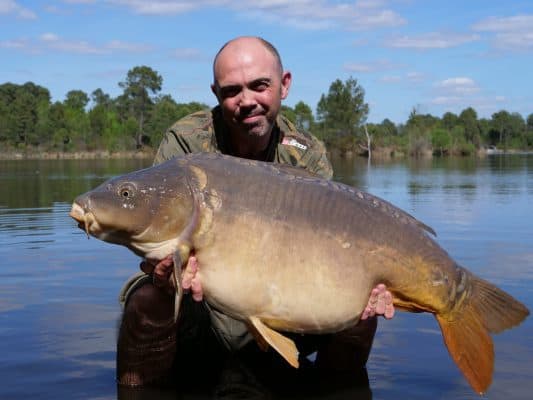 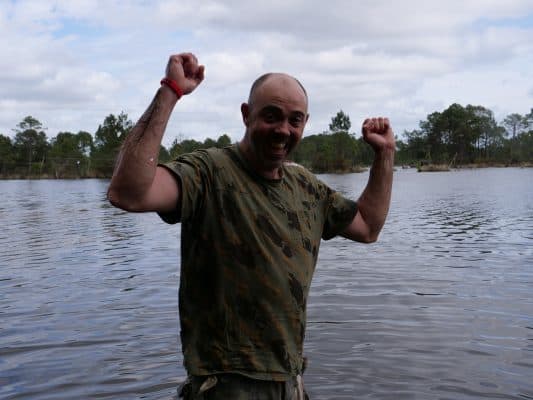 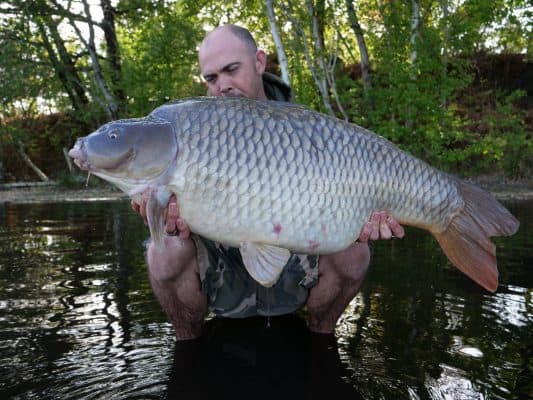 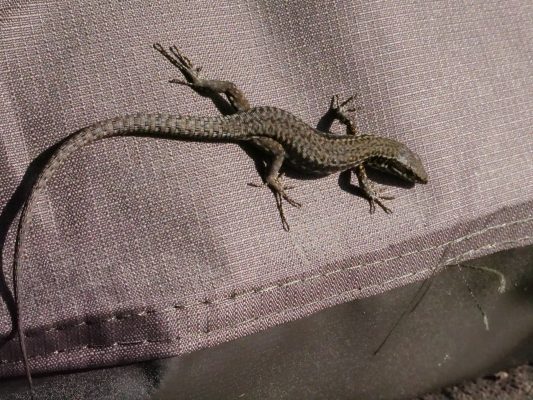